Mushrooms are a low-calorie food that packs a nutritional punch. Loaded with many health-boosting vitamins, minerals, and antioxidants, they’ve long been recognized as an important part of any diet. For instance, mushrooms raised with exposure to ultraviolet light are a good source of vitamin D, an important component in bone and immune health.

Two species of mushrooms, shiitake and reishi, are rich sources of a powerful anti-cancer agent called Lentinan. In animal studies it has shown anti-tumour properties. Lentinan is widely used in Japanese hospitals to treat cancer. It also induces the production of interferon, the body’s own anti-viral chemical used to fight off infection.

Other research suggests that lentinan may have potential in the fight against AIDS. It has demonstrated anti-HIV activity and in one U.S. study, 30% of patients taking lentinan who were HIV positive, showed an increase in their T-cell counts after 12 weeks

Shiitake mushrooms are members of a special group of medical fungi or mushrooms that have been used in Japan and South East Asia from over 1000 years. They contain a number of beneficial compounds (such as lentinan – a beta-glucan), which protect cells from oxidative damage. Eritadenine substances help reduce cholesterol levels and support cardiovascular health. Researchers at Shizuoka University in Japan found that eritadenine supplementation significantly decreased plasma cholesterol concentration.
Shiitakes are also unique because they contain all eight essential amino acids, along with linoleic acid
(an essential fatty acid). Linoleic acid helps with weight loss and building muscle. It also has bone-building benefits, improves digestion, and reduces food allergies and sensitivities.
Shiitakes also —

help to fight infection (by producing interferon, a group of natural proteins that stops viruses from multiplying)

help to fight obesity (certain components of the shiitake mushroom have hypolipidaemic (fat-reducing) effects, such as eritadenine and b-glucan, a soluble dietary fibre that is also found in barley, rye and oats. Studies have reported that b-glucan can increase satiety, reduce food intake, delay nutrition absorption and reduce plasma lipid levels)
support immune function (by way of providing important vitamins, minerals and enzymes)
have antimicrobial properties
boost energy and brain function (Shiitake mushrooms are a great source of B vitamins, which help support adrenal function and turn nutrients from food into useable energy. They also help balance hormones naturally and break through “brain fog” to maintain focus — even improving cognitive performance)
provide vitamin D (although vitamin D is best obtained from the sun, Shiitake mushrooms can also provide a good source of this essential vitamin. Vitamin D is important for bone health as well as reducing the risk of heart disease, diabetes, autoimmune diseases and and other illnesses. It is vital for the absorption and metabolism of calcium and phosphorus too. Getting an ample supply of vitamin D also helps regulate and support the immune system, maintain healthy body weight, maintain brain function as you age, reduce the severity of asthma symptoms, reduce the risk of
developing rheumatoid arthritis in women, and reduce the risk of developing multiple sclerosis)
promote skin health (Shiitakes are an excellent source of the antioxidant selenium. When selenium is taken with vitamins A and E, it can help reduce the severity of acne and the scarring that can occur afterwards). 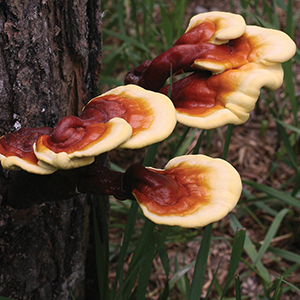 The Reishi mushroom is a fungus that grows in various hot and humid locations in Asia. For many years, it has been a staple in Eastern medicine. Within the mushroom, there are several molecules, including triterpenoids, polysaccharides and peptidoglycans, that may be responsible for its beneficial health effects.
Reishi mushrooms also —
help to boost immunity (one of the most important effects of the Reishi mushroom is that it can boost your immune system. Studies have shown that it can affect the genes in white blood cells, which are critical parts of the immune system. What’s more, these studies have found that some forms of Reishi may alter inflammation pathways in white blood cells. And evidence has shown that these mushrooms can help healthy people too. In one study, the fungus improved lymphocyte function, which helps fight infections in athletes exposed to stressful conditions)

help to fight fatigue, regulate mood and promote general wellness (one study examined its effects in 132
people with neurasthenia, a poorly defined condition associated with aches, pains, dizziness, headaches and irritability.
The researchers found that fatigue was reduced and well-being was improved after 8 weeks of taking the supplements.
Another study found that fatigue was reduced and quality of life was improved after 4 weeks of taking reishi powder in a
group of 48 breast cancer survivors. What’s more, the people in the study also experienced less anxiety and depression)
promote heart health (one 12-week study of 26 people showed that Reishi mushroom may increase “good” HDL cholesterol and decrease triglycerides)
help to lower blood sugar levels (several studies have indicated that molecules found in the Reishi mushroom can decrease blood sugar in animals)
help to protect against oxidative stress (Reishi mushrooms can enhance antioxidant status in the body).